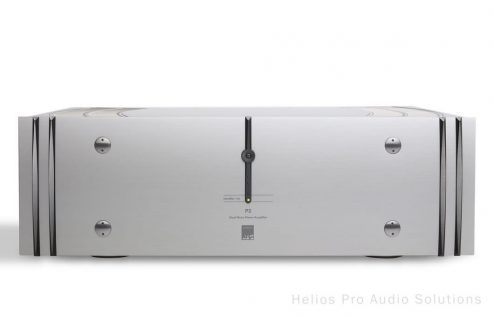 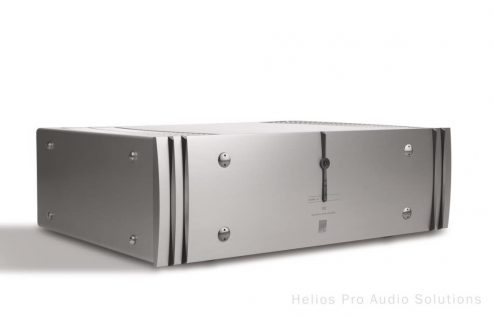 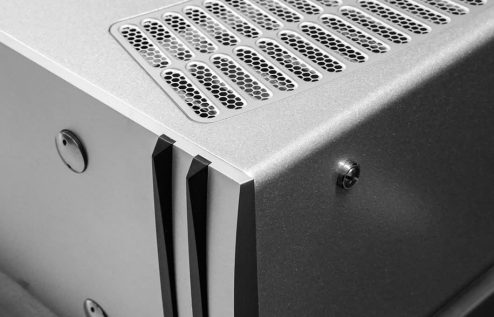 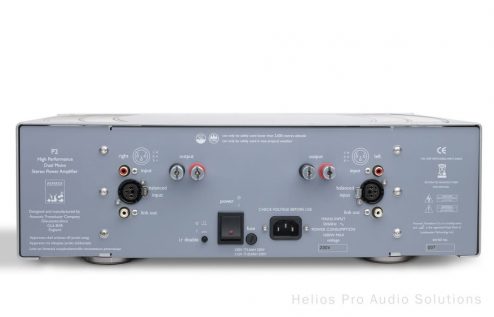 The P2 generates 300W/Ch – twice the power of its smaller P1 sibling! It will drive the most challenging loudspeakers with ATC’s signature virtues of wide bandwidth and ultra-low distortion. The ATC P2 is a Dual-Mono design, keeping the power supplies, signal and return paths discreet. This approach ensures that the amplifier will achieve the maximum signal separation with minimal crosstalk, and that intermodulation between channels via the power supplies is reduced to an absolute minimum across a frequency range of 400kHz. It also means that the power delivery from one channel cannot affect the specified power available from the other.

New Top Cover/Lid Design
The lid/cover thickness has been increased by 30%. The result is stiffer and heavier and gives the ‘feel’ of high quality. The design of the venting has also been revised; the steel mesh covering the heatsink vents has been replaced by a beautiful acid-etched stainless steel insert. Not only does this component greatly enhance the amplifier visuals, it also reduces lid/cover vibration.

New Power Supply Design
The P2’s power supply includes a massive, custom-made 400 VA low-noise transformer for each channel. The final design of these transformers is the result of seven design iterations with the goal of achieving best possible audio performance and lowest possible mechanical noise. This was achieved by using a very high grade steel core which is then vacuum impregnated with high temperature resin, post winding. The mains power ‘soft-start’ feature has also been revised, slowing the rate at which the unit powers up.

ATC make two power amplifiers that look almost identical, the specs suggest they are slightly different sizes but I don’t believe that, I do believe that the P2 is 7kg heavier than the P1 which is itself already inconveniently big boned at 23kg. What is hard to see in the specs is why the P2 sounds so much better, but it does, it has the same signal to noise ratio, crosstalk and distortion figures. The only difference is that the P2 is a 300 Watt amp, the P1 offers a ‘mere’ 150 Watts, both are more than adequately powerful to drive the vast majority of loudspeakers yet the P2 is clearly more refined, revealing and quiet. According to Ben Lilly at ATC that doubling of headroom is the main reason for the difference, it means that the amp has that much more dynamic range to work with which means quieter sounds are preserved that much more effectively. The other big difference between the two is the price, the P1 is now £2,350, the P2 just over £1,000 more expensive which seems quite reasonable for what you get.

It isn’t quite identical in appearance, there’s been a refinement of casework detailing in the ventilation slots on top but otherwise it’s spot the difference. The back panel remains much the same with balanced and single ended inputs, nicely finished binding posts for the speaker cable and link outputs for those who want more than one power amp, a feature that must be for the studio world as it’s not seen on most power amps. Power switching can be achieved by pressing the rear mounted button or with a remote handset that puts into standby, which is much more convenient. There are none of the power trigger connections beloved of American brands because that sort of thing has never taken off in the UK.

The output stage on this ATC, like its range mates on the back of the company’s active loudspeakers, is based around three pairs of MOSFET transistors in a dual mono arrangement so as to minimise interference between channels. It has a larger power supply than the P1 and higher voltage capacitors but is based on the same circuit and component types. Both amps are wide bandwidth, class AB designs of the not to be messed with variety.

Despite this the P2 has a remarkably light touch and a degree of transparency that is uncommon among high powered amplifiers. It allows the colour and variety of each recording to shine and unveils the method of their creation without undermining musical engagement. Even old favourite’s like Conjure’s ‘Wardrobe Master of Paradise’ (Music for the Texts of Ishmael Reed, American Clavé) reveals layers of detail that usually remain hidden. This fine detail is generally hidden by the noise floor but that limitation is reduced here and allows the quieter sounds to be heard, and this gives the overall sound greater richness and allows you to appreciate what each musician is doing more easily. I got totally carried away with Steely Dan’s Countdown to Ecstasy album, the immaculate timing of ‘Razor Boy’ and the glow of the lap steel guitar counterpointed so perfectly by the syncopation of the rhythm section. I had to play the whole side and came to the conclusion that it is about time to bring back the ‘Boston Rag’, whatever that might be!

Compared to a good class D amplifier the P2 sounds fresh, open and vibrant with superb low level detail, the cymbals that often remain hidden on ‘La Cancion de Sophia’ (Corea, Clarke and White Forever, Concorde Records) come up and make the intro to Clarke’s double bass solo a lot more interesting than usual. Then you hear the audience filling out the room and the live nature of the performance is brought home in no uncertain fashion, it just opens up and puts you there in the moment. By contrast with rather more pricey class A monoblocks the P2 is very good at projecting the sound into the room, you really can close your eyes and feel like the musicians are in front of you.

It seems to be entirely neutral when it comes to timing, revealing just how good the source or preamp are in this respect but not exaggerating or veiling this critical quality. Some amplifiers sound faster, others more open and airy in the treble but none can match the solidity and power of the bass from the ATC P2. It’s not fat or even phat, it’s extended, rich in texture and stops and starts just when it should. You don’t get this sort of authority from many amplifiers let alone those that are priced south of £5,000. You might get fancier metalwork and shinier connections but I guarantee you won’t find more grip and control. This means you get precisely as much kick drum as the engineer was able to capture, on James Blood Ulmer’s ‘Crying’ (Live at the Bayerischer Hof, In+Out Records) that means a visceral sense of immediacy with no overhang in the context of a massive soundstage the like of which is far too rare outside of audiophile recordings. You can get more detail and openness by spending more money, but it has to be quite a lot more. And few power amps have the driving power that’s available here, which means you can’t play at high levels in comfort. But the P2 works at sensible levels too, the majority of my listening was not of the balls out variety, hearing preservation discourages such behaviour in the long term!

The ATC is a very even handed and capable amplifier indeed, it eschews an ‘impressive’ sound in favour of quietly getting on with the job of revealing more of the music than the majority at its price and doing so in an effortless fashion. And it will do so with a variety of loudspeakers, I used PMC Fact.8 and Bowers & Wilkins 802 D3 and got a consistent result with both. I suspect that the P2 will drive just about everything out there, it’s just a question of taste as to whether you will like the result. ATC make no nonsense, down to earth amplifiers and loudspeakers based on decades of experience in the pro and consumer markets, and they make them in Gloucestershire, England in an unprepossessing building. This combined with a singularly indifferent attitude to advertising means that ATC products offer better value than most, in fact there aren’t many companies that compete on that front and even fewer who have such a solid track record. In other words this is not only a very capable amplifier it has pedigree and it’s sensibly priced. What more do you want?