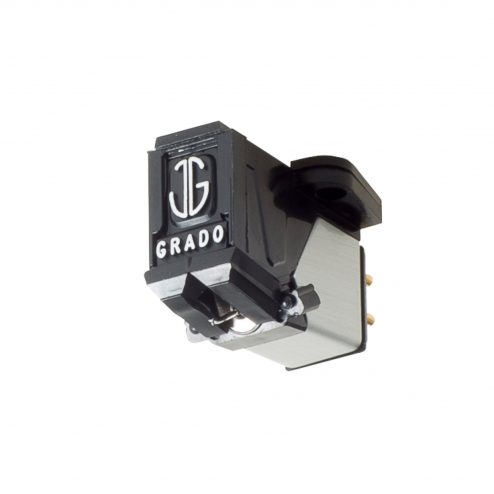 Green1 & Black1
The newly redesigned Black1 and Green1 have had their coil design reconfigured, and the effective moving mass of their generating system has been reduced by 17%. The Black1 and Green1 models use a three piece OTL cantilever technology, standard oxygen free wire in the coils and Grado’s specially designed elliptical diamond mounted in a brass bushing. The Green1 model is selected from the Black1 production run and meets higher test specifications. Approximately 15% of the production run will meet these standards and become Green1 models.

Joe Grado was amongst the founding fathers, so to speak, of high fidelity in the United States and the intervening 40 years have seen his company accumulate some 40 patents. He did pioneering work on moving – coil cartridges but most of the current Grado cartridges use the moving- iron principle. This has a fixed magnet and coil assembly and relies on the changes in magnetic field distribution caused by motion of a lightweight soft-iron element at the end of the cantilever remote from the stylus. Externally, and for matching purposes, there is little difference between moving iron pick -ups and the more common moving-magnet but the reduced weight of the mechanism of the former can provide high quality performance.

The Prestige range of cartridges comprises six models which have the same basic design but progress higher in performance, and price, in three linked pairs. The Black model is the least expensive at 49.00pounds and the next model up, the green, is actually selected from the Black production run as amongst the top 10% in terms of test specifications; and so on through the Blue/Red and Silver/Gold pairings.

On the face of it, then, the Grado Prestige Black comes to the market as an affordable replacement cartridge for use in modestly priced systems.Itís relatively high sensitivity rating of 5mV makes it a good choice for less ambitious amplifiers and itís recommended tracking force range of 1-2 grams makes it suitable for even quite basic pick-up arms. The low stylus tip mass contributes to an unusually wide frequency response extending to about 50kHz.

The elliptical diamond stylus is fixed to a brass bush at one end of the three-piece cantilever based on Gradoís patented OTL (Optimized Transmission Line) principle. This consists of three sections telescoped together, using a mixture of alloys and hollow or solid construction, bonded by damping materials and coated with a black material providing further resonance absorption. A fixed axial pivot cenres the soft-iron element between the two pairs of magnetic gaps.The system is accurately balanced and uses a reduced number of turns of oxygen-free copper wire to produce a lighter than usual assembly overall. Cartridge weight is 6 grams.

The cartridge is supplied with the standard two-hole mounting arrangement to suit any headshell. The stylus is user-replaceable and a special tool is supplied to facilitate removal, along with a plastic cover to protect the stylus when not in use.

All test measurements, and most of my listening, were carried out with the Prestige Black mounted on my reference SME Series V pickup arm but I also used the cartridge for a while as part of my review procedures on the Thorens TD146 MkVI turntable.

The recommended tracking force of 1.5g gave optimum 80/80 tracking as measured on the Ortofon TC 3000 computer testset and I saw no reason to experiment with an even lower playing weight in search of a, probably illusionary, reduction in record or stylus wear. In fact no trace of mistracking occured during extended listening tests with quite fiercely modulated LPs. Channel balance was precise, with both L/R outputs measuring 3.50mV, and channel separation was better than the specification at 25dB. Frequency response showed a slight dip in the region of 5kHz, which is typical of this type of cartridge, but climbed back to +2dB at 20kHz and held up for another ultrasonic octave beyond that.

Using a wide selection of favorite and technically demanding LPs, I rated this cartridge highly on all the important subjective sound quality criteria. With the stable tracking already mentioned, there was also a lack of any tendency to emphasize record surface noise. Heavy musical climaxes were handled well and quiet passages remained clear and interference-free. Extreme treble can often be an achilles heel for pick-up cartridges, but was enough smooth extention to provide natural string tone and sharp percussive effects. There was just a little loss of presence on voices and solo instruments and some bias in favor of the bottom half of the spectrum. Thus bass was particularly impressive in music where it matters most.