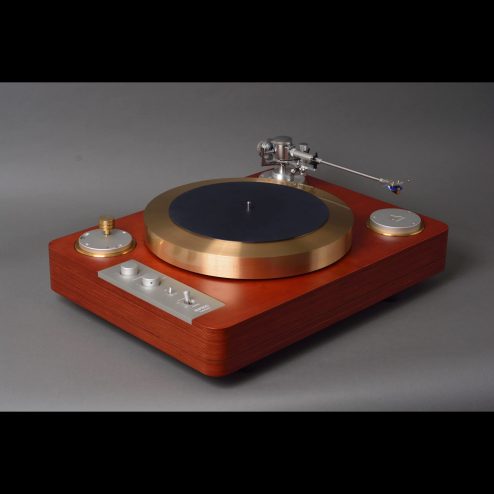 This very simple structure turntable system would have one of the ideal figuration for getting high quality reproducing. Because that it’s component is only a few parts, a turntable, a motor and a string. They don’t need any other mechanical structure or parts. And so if we had done research on each component, we could manage to reach at certain quality level. I should agree that belt driven turntable system has same component like as string driven system except belt. Well, which would be desirable belt or string? It’s a hard question because that belt and also string have each advantage and disadvantage. A belt is made of some elastic material, such as grinded urethane rubber. And the tension by this elasticity, 5% to 10% added extension, can transfer the torque for turntable. So it is easy to install and use. On the contrary, string has some difficulties to manage. Speaking strictly, string has some elasticity like as belt, but if we adopt string for the system, we have to use very critical only a few % added extension for getting nonslip transmission between pulley and string. And so making a full use of string is quite difficult. But this string has tremendous virtue. The string could transmit the circumferential velocity of the motor pulley to the turntable velocity without any delay. Because that the string works as rigid material rather than elastic body. At the same time, the belt itself is elastic material and so the motor pulley and the turntable work with some springs and dampers because of this elastic body. And it inevitably causes some delay of the motor servo, when the load of turntable fluctuates. We could sum up, fundamentally the string driven turntable system can bring out outstanding high precision rotational accuracy according to constant-speed rotation of the motor, the most significant necessary requirement for turntable system.

Again, string driven system might be hard to making full use of the potential but GMP-8000 has built in adjustment mechanism for the string tension and so once you succeed this alignment of GMP-8000, it will allow you rediscover new appeal of analog LP records as “the ultimate high-resolution sound” with the excellent drive system.

We are living under the world of some physical laws and the law of inertia is the one of close to us in such laws. You can remind the law, a car can keep speed for some moments when you get of accelerator pedal. It could be applicable also to body of rotation and the mass of rotation is the inertia moment. And the momentum of constant-speed rotation is proportional for the amount of inertia moment. So GMP-8000’s exceptional gigantic inertia moment made from precious gunmetal with high-precision processed reaches to 3,260kg.cm2, can assure of outstanding smooth and precise rotation. And also luxuriously beautiful, well-sounding and heavy weight, up to 14kg gunmetal turntable would bring you some delights of possession.

In a general way, turntable and rotating shaft are became unified. But this rotating system’s supporting point should be situated at the bottom end of the rotating shaft. And so the center of mass of the turntable is displaced from this supporting point that it leads to some grind motions. On the contrary, the bearing mechanism of GMP-8000 is consisted of fixed axis or shaft and outer rotating sliding bearing. About this mechanism, the point of thrust bearing and the center mass of gunmetal turntable is placed very close to each other. And it can bring out the outstanding stable rotation.

To lighten the thrust load, it is one of the very important factors for long term reliability of smooth rotation but also free from the mechanical noise and vibration of thrust block. And this mechanical noise finally degrades the sound reproduced. Then we included “Magnetic force aided structure” in the bearing of GMP-8000 and it can reduce more than 30 % of the weight of the turntable.

Precise rotating speed of the motor assures the constant rotation of turntable. SPEC adopted highest precision DC core-less motor and the specialized custom servo system, made by maxon motor in Swiss. Thanks to the outstanding precision core-less structure of the motor with 9 slots, strong rare earth magnet and rare metal brush can bring out absolutely free from any minute torque ripple, the vibration itself and also fully required torque with high efficiency. And this motor generates 250 pulses for a single rotation and coupled with the latest software servo circuity, the gigantic gunmetal turntable of GMP-701 could be easily driven with precision speed by this motor system.

The birch takes a long time to grow in the harsh cold environment of North European. Accordingly this wood has a fine grain and high density and so the laminated veneers have favorable planarity and rigidity. Of course, the material is also blessed with some of the internal loss of natural wood. And so the laminated wood could be some kind of ideal material for audio use, such as speaker boxes or this type of turntable chassis. The thickness of the custom laminated board is reached to 90mm and manufactured by high precision NC wood working machine in Shirakawa Co., Ltd, a famous furniture maker at Hida-Takayama city, beautiful historic town. You could find also woodworking is the Japanese traditional handcrafts.

There is the possibility of custom-made tone-arm base for fitting to your favorite 12 inches tone-arm. And this base is made from aluminum and machined to 12mm thickness with highly processing accuracy. Furthermore, this base can be fixed to the heavy under base of copper alloy ring geometry. Yes, this under base is tightly fastened on to the Finland birch laminated chassis. These combined material, robust and rigid but also has somewhat internal loss could bring out natural vibratory control around the parts of tone-arm mounting. And also the motor base structure is same as these tone-arm bases. As already stated, built in adjustment mechanism for the string tension is adapted to the aluminum motor base and the under base of copper base alloy ring. This structure provides for effective damping of the DC core-less motor’s minimal vibration.

The SPEC GMP-8000 comes without a tonearm.