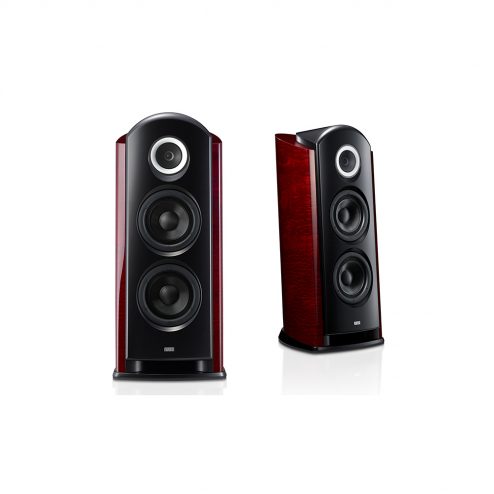 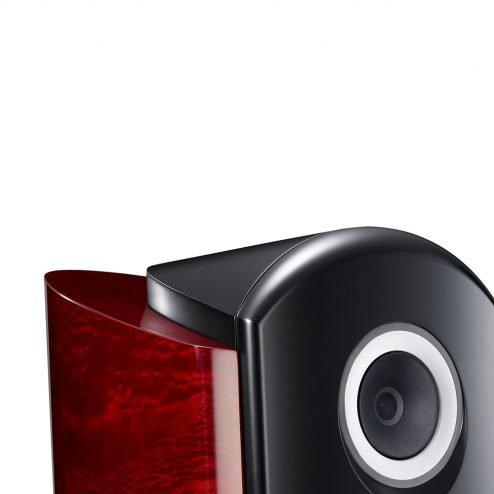 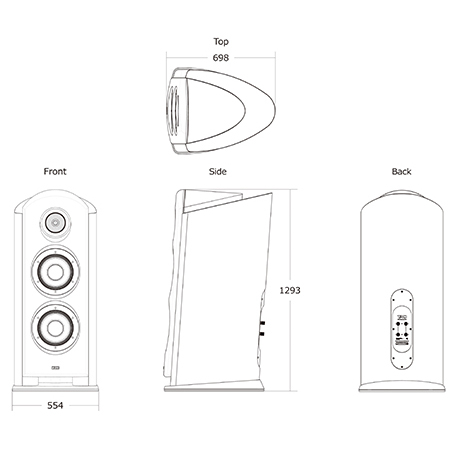 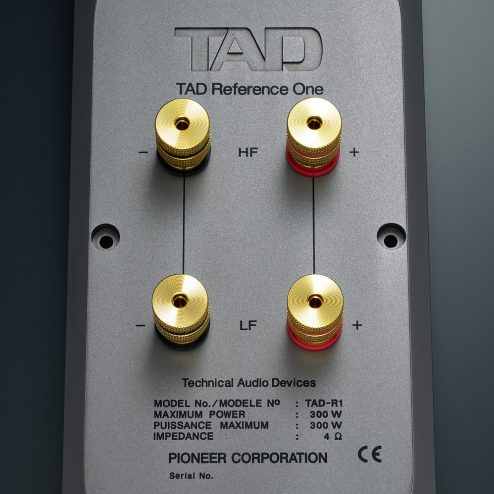 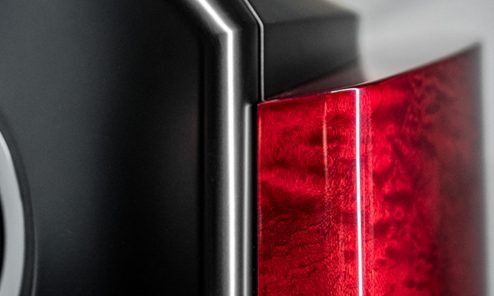 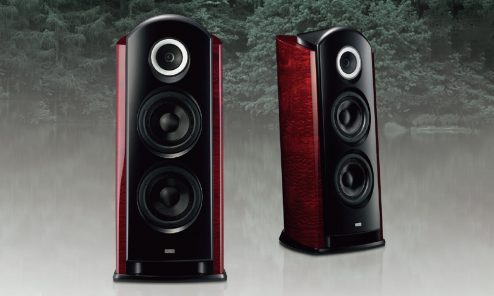 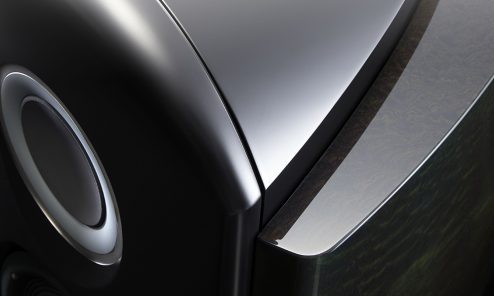 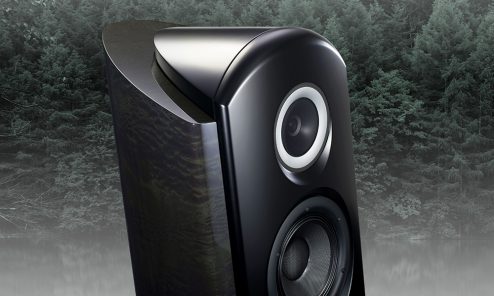 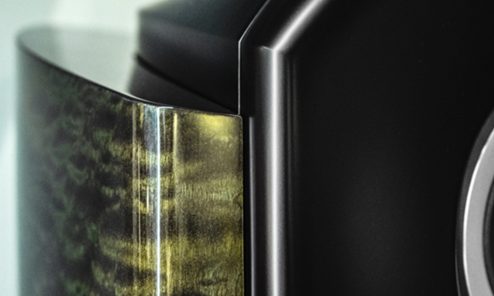 THE REFERENCE ONE TX

OUR UNCOMPROMISING PURSUIT OF THE IDEAL AND PERFECT SOUND
REPRODUCTION COMBINING ART AND TECHNOLOGICAL PROWESS.

Since its inception, the TAD Reference One has become the established reference for speaker systems in the new era of high definition audio. This ultra high end speaker system based on highly advanced technology developed by TAD (Technical Audio Devices), is used by creators of studio monitors in several leading recording studios around the world.
It employs carefully selected materials and parts, benefits from relentless attention to detail and engineering, and is backed by our unmatched design theory and testing ability.
The result is a sound field of flawless purity that achieves unprecedented professional audio artistry.
The TAD Reference One realizes richly resonant sound that has no equal.

Achieving a level of realism and vivid acoustic space created through the precision of the TAD CST Driver.

Carefully selected acoustic parts, each a result of traditional artisanship, come to life.

Achieving a level of realism and vivid acoustic space created through the precision of the TAD CST Driver.

The CST (Coherent Source Transducer) enables us to achieve our goal for the TAD Reference One: “reproduction with controlled directivity over a wide frequency range from a single point with uniform phase”. The design of the midrange cone is based on detailed calculations that result in the unique shape that produces superior acoustic characteristics and precise control of the directivity of the concentric mounted tweeter.
This configuration unifies the acoustic center of the tweeter and midrange and reconciles the phase and directional characteristics through the crossover range. The CST Driver is thus a large step forward for coaxial speakers, enabling ultra wide range reproduction of 250Hz to 100kHz, accompanied by a directivity pattern which neatly dampens without disruption across all bands. The result is extremely clear and stable imaging, a wide frequency response and incredibly rich and natural sounding reproduction. CST technology allows unprecedented wide-range reproduction and directivity control.

To realize unmatched quality and precision.

The tweeter dome and midrange cone are made of beryllium, the lightest and most rigid of metals, which makes it a superior diaphragm material and boasts a history of more than 40 years of TAD achievements. The diaphragm is produced using a vapor deposition technique developed by TAD and refined over several decades. Providing strength and uniformity combined with high internal loss, the result is smooth, superior performance. The tweeter diaphragm shape is derived using an advanced optimization method based on HSDOM (Harmonized Synthetic Diaphragm Optimum Method) computer analysis. It accurately controls differential vibration produced by the diaphragm and shifts it out of the audible band, providing uniform response to as high as 100kHz. The large midrange cone features a direct radiation, vapor deposition beryllium diaphragm. The resulting sound is astonishingly transparent, direct and precise across a wide frequency range.

To maximize the potential of the CST Driver.

The CST Driver is mounted into a highly rigid enclosure that is precisely shaped to minimize the diffraction of the radiated sound. In order to maximize the capability of the CST driver, we developed new ISO (isolation) drive technology that involves including a mechanism that blocks vibration produced by the driver unit from entering the enclosure, thus structurally separating the CST Driver from the enclosure. The TAD CST Driver, with its powerful drive capability is prevented from exciting the enclosure, thus reducing the radiation of secondary sound. It also limits the influence of the energy from the powerful bass drivers. Delivering only sound radiated from the CST Driver diaphragm improves resolution to convey accurate detail, allowing, for example, the differences in tone color that vary subtly according to how the performers play or sing to be heard with unmatched clarity.

In order to match the high speed response and power linearity of the beryllium diaphragm CST Driver, we sought to improve the low-bass reproduction linearity of the bass driver. In order to correctly reproduce signal waveforms, especially at high excursions, we developed the short voice coil OFGMS (Optimized Field Geometry Magnet Structure) magnetic circuit.
In a conventional magnetic circuit, the magnetic resistance of the pole piece impacts the magnetic flux density distribution within the gap. To avoid this compromise, the OFGMS magnetic circuit has a unique slit in the top plate that equalizes the flux path distribution and linearizes the magnetic flux density along 33mm (1.29 in.) long gap. In this way, the 25cm (10 in.) woofer unit achieves excellent drive capability and linear drive characteristics over its entire 26mm (1.02 in.) range of motion.

To achieve an optimally shaped suspension.

The suspension components in the TAD Reference One bass driver are a combination of optimum shapes and materials calculated using the most advanced computer simulation techniques. The bass driver is equipped with high performance dual spiders that ensure consistent, stable operation with low distortion even during continuous high amplitude input. The surround, which can also significantly impact sound quality, is constructed using the corrugated type similar to those used in our professional TAD Drivers. Just as with the spider, this type of surround supports the cone during large excursions allowing accurate and stable motion. As the result, the linearity of the suspension, supporting the diaphragm assembly, has been significantly improved. This is the foundation of the TAD Reference One sound: extremely deep, clear bass that reveals the full sense of scale and impact of the music.

To prevent deformation of the TLCC diaphragm, even during high amplitude bass output.

The TAD Reference One bass driver is driven by an oversized, 100mm diameter voice coil and large neodymium magnet. To handle the force generated by this motor, the diaphragm must be very strong and stiff. We were able to achieve ideal physical properties including structural body strength, by using a TLCC (Tri-Laminate Composite Cone) diaphragm that has a unique triple laminated construction: a core of foamed acrylamide sandwiched front and rear by direction-oriented aramid fibers. To eliminate drive loss for more efficient power handling, the dust cap uses the same material. Furthermore, by joining the cone, dust cap and voice coil at a single point, the voice coil drive is transmitted directly to the cone. The result is not only fast response and clear bass, but low coloration sound extending through to the midrange.

To raise strength to the ultimate level.

The TAD Reference One features our new SILENT (Structurally Inert Laminated Enclosure Technology) cabinet: the ultimate in elegant curves and immense stability. It is constructed from carefully selected materials to resonances, in order that the superior performance of the drive unit is maintained to the maximum degree. The basis of our efforts to eliminate resonance is the strong enclosure design, inspired by the structural theory of aircraft wings and ships. The structure consists of a strong framework with a skeleton having a 21mm (0.9 in.) thick birch plywood transverse bulkhead. It is clad with a hybrid of materials that combine 50mm (2 in.) thick side panels made by high frequency hot press forming glued to CNC machined plywood panels with a maximum thickness of 137mm (5.7 in.). Use of the teardrop form, a design incorporating the concept of hydrodynamics in acoustic engineering, minimizes sound diffraction anomalies. Finally, by applying ABD technology, a technique whereby the dual bass drivers are located so as to eliminate the formation of higher frequency standing waves inside the enclosure that negatively impact sound quality, we achieved a revolutionary enclosure.

By inclining the Reference One enclosure backwards by four degrees, driver time alignment is improved. In addition, the location of the force produced by the powerful bass drivers is placed directly over the center of gravity of the enclosure. This, together with the ultra heavy 150kg weight of the system and laminated hybrid base plate of aircraft-grade aluminum and birch plywood, achieves impressively powerful bass reproduction and detailed expressive capability. Finally, two types of spikes, one cone-shaped and the other dome-shaped, provide three-point support, ensuring excellent stability and vibration control, regardless of where the speakers are positioned.

The bass reflex port, utilizes the design concept of the compression driver and horn seen in the TAD systems used by professionals. It features an aerodynamic port system based on the theory of precise fluid design. Its performance is such that that it produces absolutely no air noise, even when the woofer unit is driven at the limit of its excursion range. Superb control of air flow and pressure inside the port greatly contributes to the realization of deep bass reproduction with unprecedented clarity.

Vivid colors further enhance the craftwork of the structural beauty.

The outer surface of the enclosure features natural Pommele Sapele wood, which imparts an artistic air of elegance with its unique wavy pattern similar to that used in the construction of high-end cabinetry and top-grade musical instruments. In the finishing process, skilled artisans meticulously perform dozens of finishing steps for each enclosure. The enclosure comes in two colors – Emerald Black and Beryl Red – which derives from beryl, a rare ore that is the raw material used for the beryllium diaphragm. It adds a sparkling accent to the user’s audio collection and interior décor with its beautiful texture unique to natural wood and deep gloss with color tones that exude elegance.

“Tendo Mokko” is a leading luxury furniture manufacturer in Japan, established in Tendo, Yamagata in 1940. Tendo Mokko has been creating numerous highly acclaimed furniture, including works with globally renowned designers and architects such as Sori Yanagi and Kenzo Tange, respectively. TAD celebrates its first collaboration with Tendo Mokko. In the “SILENT Enclosure”, their skillful techniques of artisan craftsmanship are incorporated, elevating the supreme functional beauty to yet another level.

Carefully selected acoustic parts, each a result of traditional artisanship, come to life.